Christianity is the world's most widely practiced religion and although it has many denominations and great diversity, all Christians are united in Jesus Christ. At the heart of Christianity is a loving creator God who is also our redeemer.

The name "Christianity" comes from the Greek word Christos, meaning "annointed", a reference to Jesus.

Christianity is about God reaching out his hand in friendship to mankind. Christians believe that the whole world and everything in it was created by God. God is a personal being, and by some mystery that we cannot understand, he is three, yet one: Father, Son and Spirit (see the Trinity). He created people in his image, to love him. Yet every person has rebelled against God. Yet instead of turning his back on us, God became a man, Jesus, who was born about 4 BC and lived among us. He taught a message of love throughout Palestine but public opinion turned against him and he was executed as a young man. He died because of us - the death that we should have died. He was crucified on a cross, but he rose from the dead, and now calls us to trust him, to love him and to repent of our rebellion. If we do this, then we our relationship with God becomes restored and we will live forever with God.

An underlying theme of Christianity is love, in particular, God's love for people. 1 John 3:16 tells us that Jesus' love was so great that he lay down his life for his us

By this we know love, because he laid down his life for us. And we ought to lay down our lives for the brothers.

Early in the New Testament Jesus summarized the Law, saying that we should love God, and love our neighbour, in Mark 12:28-30

Another key concept in Christianity is grace. Grace is God's love poured out on undeserving humanity. The doctrine about grace teaches us that although all people have fallen short of the glory of God and have sinned and turned away from God, God loves us still. Nothing we do can restore us to a right relationship with God. It is only through faith in Jesus Christ, in his death and resurrection that we can return to God. This gift of restoration of right relationship with God is called grace. 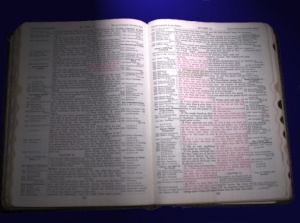 The Bible is the collection of documents acknowledged by Christians to be inspired by God. It contains 66 books and is divided into the Old Testament and the New Testament. It tells of the story of the creation of the universe and man by God, the rebellion of man against God and his rescue plan for humanity through his Son, Jesus Christ. It tells of the history of the nation of Israel leading up to the time of Jesus, and then the formation of the early church following Jesus. Not only does it record history, it also contains stories and parables, poetry, proverbs and prophecy.

A church building is a building used in Christian worship. The term church also refers to the combined Christian community of believers.

Since the church was formed, major events and conflict, often over matters of doctrine have resulted in significant rifts in the church. One of the most notable debates in the Christian church has been the debate about salvation (being saved) by faith alone (belief in Jesus and nothing else) or through faith and good works (belief in Jesus and performing good deeds). This debate was the key issue in the Reformation of the sixteenth century and lead to the split of the Roman Catholic Church with the formation of Protestant churches such as the Lutheran Church.

Although there is only one Catholic Church, there are tens of thousands of Christian denominations or churches. These denominations have formed and divided since the time of Christ, because Christians have had differences in beliefs and practices. Some of the main groups include Eastern Orthodoxy, Roman Catholicism and the Protestant churches and Pentecostal churches. 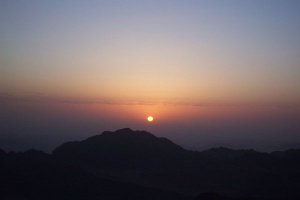 Sunrise at Mount Sinai in Egypt

Throughout church history, people have devoted themselves to great works of literature and art for God's glory and honour. Today, a number of Christians are creating works of art in a variety of media, music and visual mediums.

Since Christians have met together, they have sung to God and about God. Early Jewish Christians probably sung psalms. In later centuries, monophonic Gregorian chants were widely sung. During and following the Protestant Reformation, hundreds of hymns were written by men like Martin Luther and Charles Wesley. In recent decades, Contemporary Christian Music, Christian music in rock style, has become increasingly popular. Today, a number of Christians are creating music in a variety of genres.

Some of the most well-known movies have strong Christian themes. One of the earliest Christian movies was The Ten Commandments by Cecil B. DeMill. In 2004, The Passion of the Christ, describing the night of Jesus' death was a film that made a world-wide impact. In 2005, the movie The Chronicles of Narnia: The Lion, the Witch and the Wardrobe was being released based on the famous book by C.S. Lewis. Today, a number of Christians are producing films in a variety of genres.

Christianity and the Internet

Since the beginning of the world wide web, Christians have been involved in creating websites dedicated to different aspects of Christianity. Some of the most important ones have been sites containing the Bible in different versions like BibleGateway (biblegateway.com). Today, a number of Christians are creating web sites, applications and social networking resources.

There are no requirements in Christianity about what we should wear, although, in many denominations there are special uniforms for those involved in the organisation and running of the denomination. Many Christians also wear symbols of their faith, such as a cross or crucifix. In many countries with predominant Eastern Orthodox and Roman Catholic populations, people may erect a shrine or symbol of an aspect of their faith that is important to them. In the Reformation, there was a backlash against these symbols which were often seen as idols.

Doctrine means a set of beliefs or teaching. Various Creeds and catechisms have been written as statements of the beliefs of different Christians. Today there are still considerable differences in understanding on major themes in Christianity like justification, salvation and grace.

Christians believe in one God who is yet three persons as described above. They also believe that Jesus was both a man and both God, and that he bore the sins of mankind on the cross and was resurrected three days later.

Christianity is primarily are religion of love. It is about God's love for us, and our response. We are asked to respond by loving God with our whole hearts, and loving our neighbours, including our enemies, as ourselves.

However, the Bible also makes clear that the every person has rebelled against God and sins. In the Book of Romans it says that "all have sinned". Later however, the author goes on to tell us that we can be forgiven and appear without sin before God, and that this is through the faith in Jesus and his death and resurrection.

The Persecuted Church, Mission and Christianity around the world

The world's 5 inhabited continents contain almost 7 billion people. The population is increasing rapidly, and it doubled between 1960 and 2000. There are 237 independent states. 66 of these have significant restrictions on religious belief. About 30% of the world's population call themselves Christian (2 billion people), 20% call themselves Muslim (1.3 billion people), 15% are non-religious (1 billion) and 13% call themselves Hindu. Although Europe is rapidly becoming secular and non-religious, the majority of Christians live in areas where European settlement or missionary work has been significant. Asia is the least evangelized continent. Of Christians, there are about 1 billion Roman Catholic, 700 million Protestant and 550 million Eastern Orthodox Christians. Also see Christianity by country

Christianity will go. It will vanish and shrink. I needn't argue with that; I'm right and I will be proved right. We're more popular than Jesus now; I don't know which will go first — rock and roll or Christianity.

I believe in Christianity as I believe that the sun has risen: not only because I see it, but because by it I see everything else.

My parents would always tell me that I should not hate the white man, but that it was my duty as a Christian to love all.