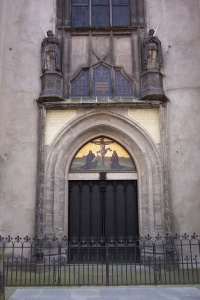 Door of the Schlosskirche (castle church) to which Luther is said to have nailed his 95 Theses, sparking the Reformation.

Reformation Day is a Christian holiday celebrated on October 31 in remembrance of the Reformation, particularly by Lutheran and some Reformed church communities. It is a civic holiday in Slovenia (since the Reformation contributed to its cultural development profoundly, although Slovenians are mainly Roman Catholics) and in the German states of Brandenburg, Mecklenburg-Vorpommern, Saxony, Saxony-Anhalt, and Thuringia.

On this day in 1517, Martin Luther posted a proposal at the doors of a church in Wittenberg, Germany to debate the doctrine and practice of indulgences. This proposal is popularly known as the 95 Theses, which he nailed to the Castle Church doors. This was not an act of defiance or provocation as is sometimes thought. Since the Castle Church faced Wittenberg's main thoroughfare, the church door functioned as a public bulletin board and was therefore the logical place for posting important notices. Also, the theses were written in Latin, the language of the church, and not in the vernacular. Nonetheless, the event created a controversy between Luther and those allied with the Pope over a variety of doctrines and practices. When Luther and his supporters were excommunicated in 1520, the Lutheran tradition was born. This in turn would later ease the creation of the Reformed and Anabaptist traditions as well.

The liturgical color of the day is red, which represents the Holy Spirit and the Martyrs of the Christian Church. Luther's hymn, A Mighty Fortress is Our God is traditionally sung on this day. Lutherans customarily stand during the hymn, in memory of its use in the religious wars of the Sixteenth Century. It is also traditional in some Lutheran schools for schoolchildren to hold Reformation Day plays or pageants that re-enact scenes from the life of Martin Luther. The fact that Reformation Day coincides with Halloween may not be mere coincidence. Halloween, being the Eve of All Saints' Day might have been an entirely appropriate day for Luther to post his 95 Theses against indulgences since the castle church would be open on All Saints' Day specifically for people to view a large collection of relics. The viewing of these relics was said to promise a reduction in time in purgatory similar to that of the purchase of an indulgence. Dr. Luther may have been shrewd in his choice of that day to post his theses.