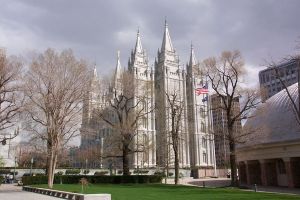 March 31, 2004... We drove north towards Utah and stopped at the pretty town of Kanab for our first sleep on a real bed for a few days. Our motel room gave us a chance to recharge all that electrical equipment we're carrying and do the washing. We knew we were in Utah, because apart from the Gideon's Bible in the room, there was also the Book of Mormon, there for our perusal. The next morning we drove to Zion National Park, which has stunning rocks and cliffs. In fact, the whole drive has passed through the most beautiful country we've ever seen - we didn't realise America had so much natural beauty. We even saw a squirrel who came very close to us. We arrived in the outskirts of Salt Lake City late in the afternoon. The city is surrounded by mountains covered with snow - it's very beautiful. In the evening we watched the Passion of the Christ. Neither of us have cried so much in a movie before. It was extremely moving, and was true to the Gospel. We both prayed that many people would see the film. "But He was pierced for our transgressions, He was crushed for our iniquities; the punishment that brought us peace was upon Him, and by His wounds we are healed" (Isaiah 53:5)...We slept in Walmart again then headed for the public library (gotta love that free internet). Now we're off to explore downtown Salt Lake City. Love Graham and Nicole.

April 1, 2004... Salt Lake City, Utah - This sure is an interesting place to visit. We spent most of yesterday in "Temple Square" - the Mormon heart of Salt Lake City. Actually we didn't intend to spend quite so much time there but they rope you into a free guided tour to see each thing! Having said that, the tours were fascinating. The architecture and gardens in the square are magnificent. There is an enormous temple (for private worship), tabernacle (for group gatherings), and convention centre (seating 21,000 people). We learnt all about the Mormon beliefs, including that Jesus visited the Americas after his resurrection, and plans to establish his Kingdom on the American continent. There's also the added "Book of Mormon" in addition to the Bible, that explains how some tribes of Israel sailed to America, becoming the ancestors of some American Indians. Of course, the original texts of the book of Mormon (from 600 BC to AD 400) which were discovered in the 19th Century, have conveniently "disappeared." It's all very interesting and bizarre. The people here are lovely and friendly, and strangely enough, this city has reminded us a bit of Adelaide...